Hiking in Japan during summer or rain has it’s own advantages. Lush green forests and lesses layers of clothes. The waterfalls are simply beautiful. Sawanobori or the stream climbing is popular sport in Japan. Sawa stands for stream; noboru is to climb.

This hike was done in mid July. July is muggy and not so comfortable but rainy season is almost over by then so the forests are greener than ever before.

Mt Mito! One of the three main mountains in Okutama. Other two are Mt Odake and Mt Kumotori. I have published a blog about Mt Kumotori. Planning to post a blog on Odake soon. Kumotori is far from Tokyo and the hike is of 37km. So almost impossible for one day hiking. Mito and Odake on the other hand, are doable in one day.

Mi-to-san 三頭山 literally means mountain with three heads. The mountain has three tops. Middle one is the tallest with 1524m.

The hike is of five hours and the total distance is 8km. From Okutama station take a bus to Miyama Bridge and get down at Oguchi Jinja bus stop. Just in front of you, you’ll see the floating bridge of Okutama. Your goal is on the other side of the bay. And believe me it is much greener.

We reached the bus stop at around nine and apparently due to increased level of water in the damn they were going to remove the bridge in half an hour.

Removing the bridge. Huh. That was first. We started crossing and realized it is definitely not a permanent concrete bridge. Walking on it almost felt like walking on a deck of a ship or something. It was moving that much! Although pretty safe to cross, I wanted to be over with it. Friends rocking the bridge on purpose; and clicking pictures. I somehow made it to the end.

The circular road on the other side was soon over.

We were now welcomed by a beautifully maintained path. Mito is famous for it’s beech forest. The mountain was forbidden to enter during Edo period, so this untouched beauty has patches of enormous beech trees.

The word Shinrin-yoku was developed in Japan in 1980. It means, “taking in the forest atmosphere” or in simpler word “forest breathing”. Walking in the living forest has loads of benefits. Forest bathing is known as a therapy to reduce stress, improve mood, increase level of energy, better sleep and many more.

The high-pitched songs of cicadas on the trees made us realize the forest is very much alive and all natural. As we went further inside the sound just got louder and louder. I wasn’t irritated by the sound yet, just got used to it after a point. But when the hike was over and we got on to the bus it was significantly quiet.

I have one frustrating memory of this bug. While studying in Delhi, I had visited Dhamma Sota in a village of Haryana for 10 days of Vipassana meditation. It’s a guided meditation course and best thing about it is you have to observe Noble silence during the entire course. Noble silence means you cannot communicate even by using the signs. On the third day I remember there was a cicada in my room. Ten hours of mediation each day, no exercise and no dinner equals almost no sleep. My sleep is already light. I tried to find the little brat and to my surprise found it. I quickly grabbed a paper cup and placed it on the bug. I could feel the jumping and cry for help. The survival instinct of a hosteliet made me grab a broom to kill it. But then in the atmosphere of the ashram over thinking took over, my grip on the cup lost and before I could decide how to release it outside the little monster escaped. This time I could not find  it and next day during the meditation session, there was a girl resting her head on the wall, snoring.

Coming back to the hike. Although the distance is short you have to do a bit of traversing to reach on top. Mt Iyo and Mt Nukasazu are the two mountains you climb before finally reaching Mito. Great exercise.

Once that’s over the views are rewarding. On a clear day you can see Mt Fuji. I noticed peculiar peak of Mt Odake on the other side and also recognized my dear Kumotori.

July is the season of Ajisai or the hydrangea in Japan. Purple blue-ish flower bushes are delightful in cities. The mountain Ajisai are pretty too. Got to see many on the way down.

At the end of the hike there is a hut. Warm tea is for free. We relaxed for a while and took a bus back to Musashi Itsukaichi.

What a beautiful day. Hope you enjoyed my story. Do visit once in a while for more 🙂 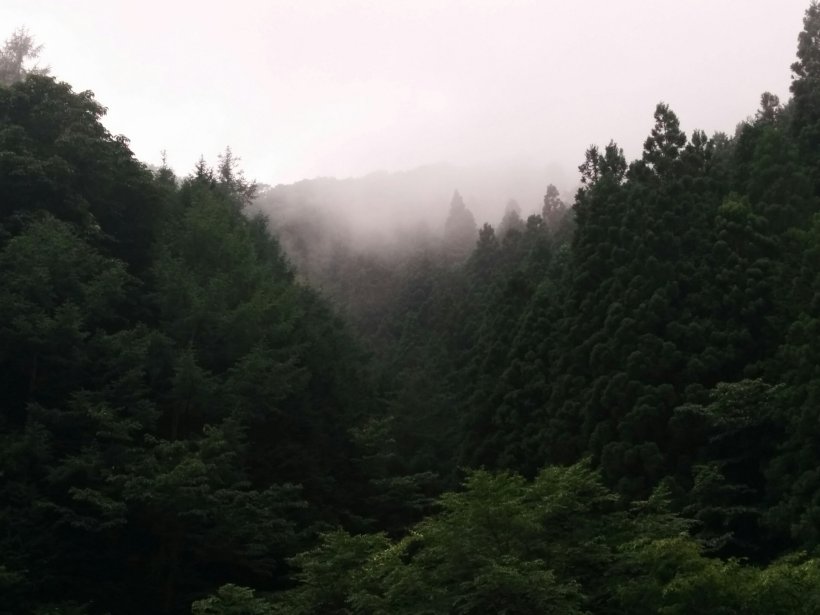